Why does fabric darken when wet? 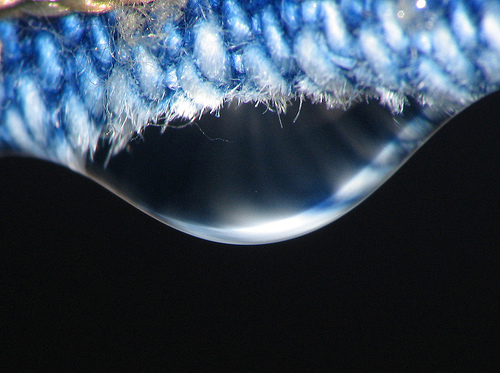 The way we perceive colour is by the light which hits the object we are looking at. When white light (containing all colours) hits a blue dress, all the colours in the light are absorbed by the dress, apart from blue, which gets emitted. This blue light emitted by the dress is why it appears blue to us.

So why do fabrics darken noticeably when they become wet? Simplistically speaking it is because the mixture of water and cloth bends the light allowing less of it to reach our retina’s and therefore making the fabric appear darker.

Fabric is composed of fibres and micro-fibres, in between which is air. When the fabric is dry the photons of light are absorbed into the object but some are reflected back into your eye, depicting the colour of the object.

When the fabric gets wet, the water fills the gaps between the fibres and micro-fibres in the cloth. The photons of light are now more likely to enter the water and bend away from your eye, so some of the light which you would have seen when the cloth was dry is now being bent away, thereby making the fabric appear darker.

In fact, water will actually make the speed of light slower: “We think of light as waves that travel in straight lines at a constant speed — 300,000 kilometres per second. But that’s only true for light travelling in a vacuum, like empty space. Whenever light has to travel through anything with actual molecules floating around in it — like air, water or fabric — it slows down.” Professor  David Jamieson from the School of Physics at The University of Melbourne, says: “water has way more molecules than the same volume of air, so light really has to work the room when it goes through the wet stuff — it’s 25 per cent slower in water than it is in space. And fabric is even more dense than water, so light slows down by a massive 33 per cent travelling through your t-shirt.

However, the speed of light is not what makes the fabric appear darker but what happens when the light changes speed, which is that it bends.

Because the refractive index of fabric is a lot closer to that of water than it is to air the change in speed of light is much less dramatic, meaning that the light bends at a smaller angle. The small angles create the “darkness” in the wet area because it takes a lot more bends for light to be reflected into our eyes, therefore making it appear darker.

Once the water evaporates the fabric will appear to be the same colour again as the light is reflected back into our eyes without being bent by the water molecules.

This effect is more pronounced with natural fibres such as wool and cotton as the fibres absorb a greater amount of water than synthetic fibres. 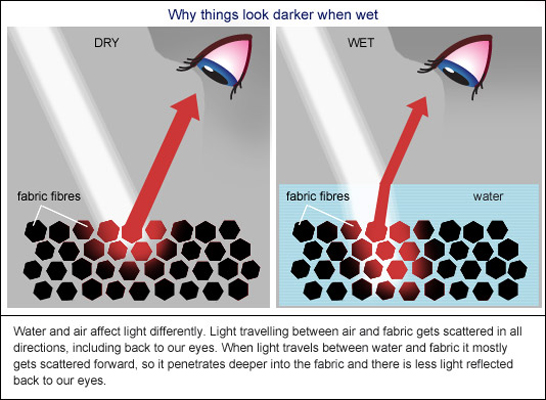 The Colourist; VeriVide’s past, present & future